I have a lot of transcripts I’ve done in InqScribe, and recently I’ve wanted to dive into Computer Assisted Qualitative Data AnalysiS (CAQDAS). I chose MAXQDA 12 since it has the most rich transcription feature set for Macs. ATLAS.ti & NVivo both have rich features in their Windows versions, but their Mac versions still lag behind in features, especially with transcription.

Goal: Be able to import my already completed InqScribe video transcript and have it linked with the video file within MAXQDA. Once imported, I want to be able to edit it within MAXQDA.

MAXQDA only recognizes transcripts that follow the f4/f5 (audiotranskription.de) format & there is no way to link video to imported transcript after you’ve imported the transcript. The f4/f5 format looks like:

The timestamps come after the text, and follow the format #HH:MM:SS-m# In InqScribe the same sample transcript for me would look like this: 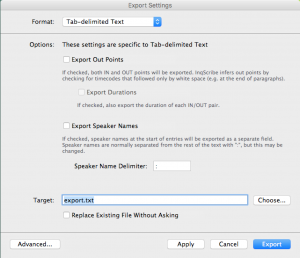 Open your exported text file in TextEdit or any other word processor with the ability to Find & Replace. For my sample transcript the file looks like this: 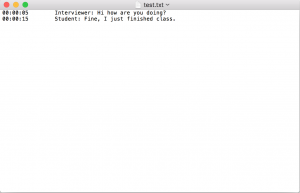 Now I’m going to go to Edit->Find->Find and Replace… Now select the tab space between the timestamp and the text, copy it, and paste that space into the Find box. It should highlight all of the tabs now like this:

In the replace box type: -0#
Note that there is a space after the # symbol. Now replace all instances. Now you should have a file that looks like this:

Next all we need to do is add the leading # symbol to every line. Here is a trick I use. I first select the leading zero and the previous space like so: 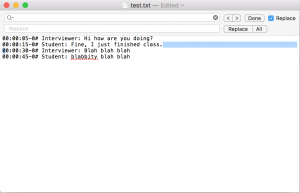 I copy and paste that selection into the find box and the replace box. Then I modify the replace box by placing a # symbol in front of the zero like this and replace all: 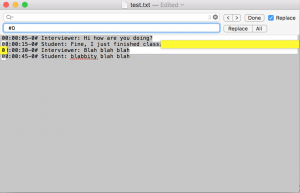 Note that it won’t fix the first instance of a timestamp, in my example it won’t catch the first line. So I just fix that manually. So now your file looks like this and is ready to be imported into MAXQDA: 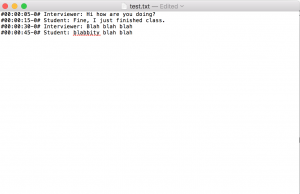 In MAXQDA go to Documents->Import f4/f5 transcript, select your newly edited text file. It will then prompt you to select the accompanying video, do so, and as long as your video is in the right format, you’re ready to rock.